On July 5, 2021, CBSE had announced that the Syllabus for Class 12 Board Exams will also be deducted as per a Term-based Examination System and on July 22, 2021, they finalised the reduced syllabus as well by providing changed PDFs.

CBSE Class 12 Syllabus has undergone drastic changes since the previous 2020-21 session. Due to the COVID-19 pandemic, the education system has been challenging for both teachers and students.

So, similar to the 30% reduction in the last session, CBSE decided to reduce the overall syllabus according to the Term-based Board Examination for the 2021-22 session again.

We, at Educart, were prompt about it and have updated the changes in all the subjects for you. Here, you can find:

With all this information in hand, both teachers and students will have a defined structure to begin the learning process on time and efficiently.

Now, let us take a look at the syllabus for Term I and Term II Board Exams in detail and try to understand what changes have been made.

Experiments Assigned for Term I

1. To determine resistivity of two / three wires by plotting a graph between potential difference versus current.

2. To find resistance of a given wire / standard resistor using a metre bridge.

To verify the laws of combination (series) of resistances using a metre bridge.

To verify the laws of combination (parallel) of resistances using a metre bridge.

3. To compare the EMF of two given primary cells using potentiometer.

To determine the internal resistance of a given primary cell using potentiometer.

4. To determine resistance of a galvanometer by half-deflection method and to find its figure of merit.

5. To convert the given galvanometer (of known resistance and figure of merit) into a voltmeter of desired range and to verify the same.

To convert the given galvanometer (of known resistance and figure of merit) into an ammeter of desired range and to verify the same.

6. To find the frequency of AC mains with a sonometer.

Activities Assigned for Term I

1. To measure the resistance and impedance of an inductor with or without iron core.

2. To measure resistance, voltage (AC/DC), current (AC) and check continuity of a given circuit using a multimeter.

4. To assemble the components of a given electrical circuit.

5. To study the variation in potential drop with length of a wire for a steady current.

6. To draw the diagram of a given open circuit comprising at least a battery, resistor/rheostat, key, ammeter and voltmeter. Mark the components that are not connected in proper order and correct the circuit and also the circuit diagram.

1. To find the focal length of a convex lens by plotting graphs between u and v or between 1/u and1/v.

2. To find the focal length of a convex mirror, using a convex lens.

To find the focal length of a concave lens, using a convex lens.

3. To determine angle of minimum deviation for a given prism by plotting a graph between angle of incidence and angle of deviation.

4. To determine the refractive index of a glass slab using a travelling microscope.

5. To find the refractive index of a liquid by using a convex lens and plane mirror.

6. To draw the I-V characteristic curve for a p-n junction diode in forward bias and reverse bias.

1. To identify a diode, an LED, a resistor and a capacitor from a mixed collection of such items.

2. Use a multimeter to see the unidirectional flow of current in case of a diode and an LED and check whether a given electronic component (e.g., diode) is in working order.

3. To study the effect of intensity of light (by varying distance of the source) on an LDR.

4. To observe refraction and lateral deviation of a beam of light incident obliquely on a glass slab.

6. To observe diffraction of light due to a thin slit.

7. To study the nature and size of the image formed by a (i) convex lens, (ii) concave mirror, on a screen by using a candle and a screen (for different distances of the candle from the lens/mirror).

8. To obtain a lens combination with the specified focal length by using two lenses from the given set of lenses.

Our other latest CLASS 12 EDUCART QUESTION BANKS FOR 2022 EXAMS are the ONLY BOOK available in the market for extensive Term-based exam preparation.

Each book includes all possible types of MCQs (Competency-based, Case/ Extract/ Poem-based, A/R type), Chapter-wise Notes, Self Practice Questions, and Topper's Answers. You will have an abundance of questions to practice.

Any other information regarding CBSE curriculum, paper pattern, study material, and notifications is available below in the supporting links. 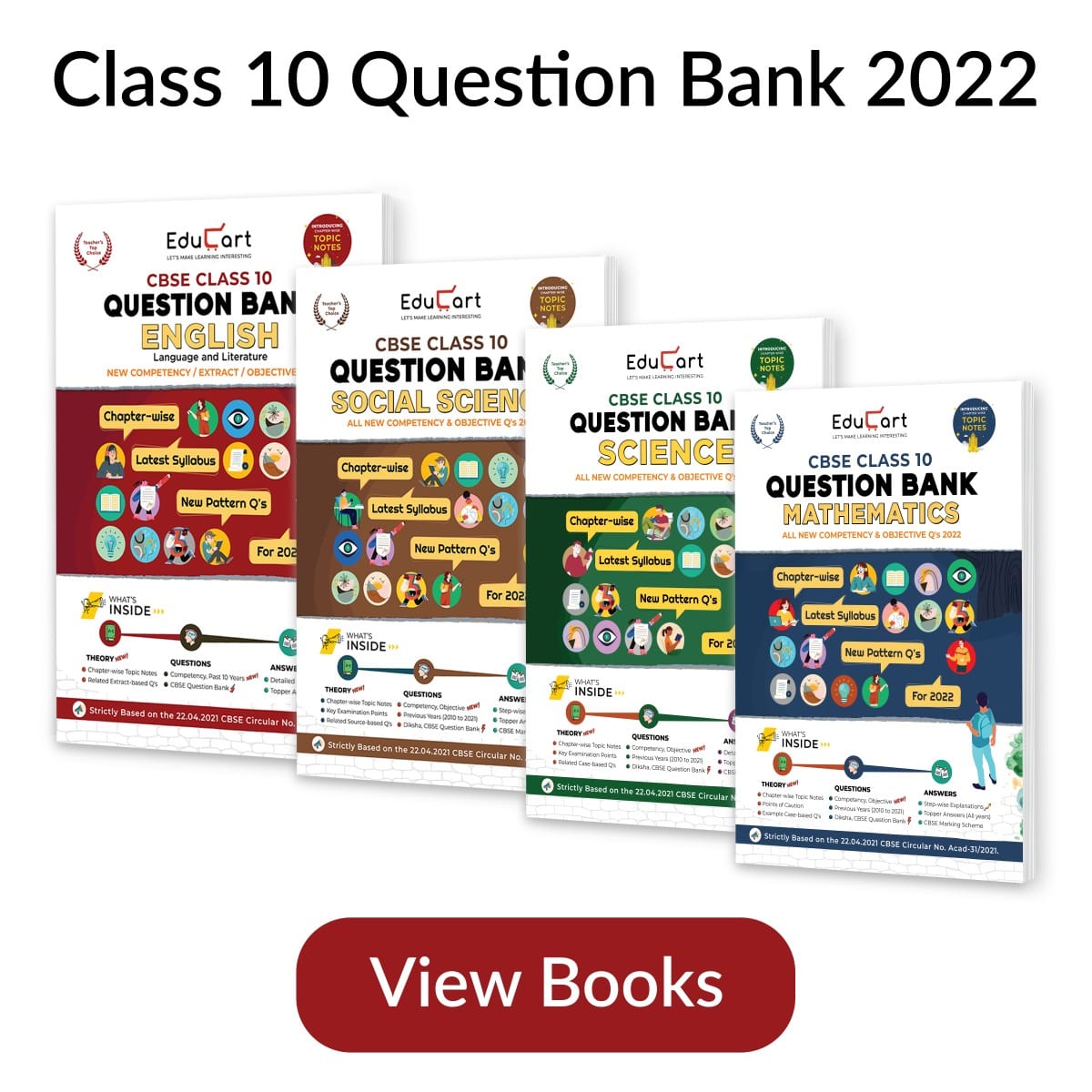